1,000 Years of History in the Land of the Prince Bishops

The village of Neasham lies on a bend of the River Tees on the County Durham side of the River, about four miles south of Darlington.

The settlement was established more than 1,000 years ago and is steeped in history. The High Ford, crossing the river between Eryholme and Neasham was part of the Great Road North. Neasham, being the first village on the north side of the river, was the gateway to the Land of the Prince Bishops. Each newly appointed Bishop of Durham was met at the ford in the middle of the Tees, where County Durham officially begins, and presented with the Falchion by the Lord of Sockburn Manor. The Falchion in this inaugural ceremony had been used by the returned crusader Sir John Conyers, who slew the famous Sockburn Worm. This ceremony still takes place today – although the mid-point of nearby Croft bridge has been substituted for the middle of the ford at Neasham.

Neasham Civil Parish extends beyond the village to incorporate the nearby village of Low Dinsdale (which also has roots going back over a thousand years), and settlements at Sockburn, Neasham Covert and Brasscastle as well as many outlying farms and agricultural cottages; and extends from the north bank of the meandering Tees northwards to the edge of the village of Middleton St. George and westwards upstream to Hurworth.

The Parish has over 400 electors in just over 200 dwellings, and whilst most of the houses in Neasham Village have been built within the last 50 years, there remain several buildings dating back to the 1700’s (many of which are listed), with a further residential expansion in the early part of the 20th Century. 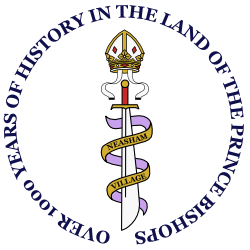 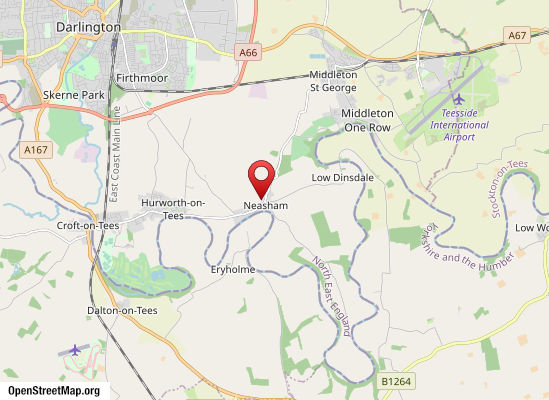 Access to Neasham by road may be taken from the A66 Darlington by-pass, signposted from the junction at the football stadium. From Darlington Town Centre, main road access is via the A167 road towards Northallerton, turning off at Hurworth Place, immediately before Croft bridge and travelling through Hurworth to Neasham. If travelling on the A67 road from Yarm or Teesside Airport, take the turning to Middleton St.George and follow the signs to Neasham from the Village Centre.

Neasham is not directly served by a scheduled bus service. Arriva service 12 passes the entrance to Neasham, but the nearest stop is a further kilometre away outside the Otter & Fish at the entrance to Hurworth. Neasham is served by Zone 3 of the Tees Flex on-demand bus service operated by Stagecoach, which joins the villages in the Tees Valley with the key locations in Darlington and Stockton and operates between 7a.m. and 8p.m. on weekdays and Saturdays. Bookings can be made by downloading the Tees Flex App, or by phone on 0330 678 1545. Further information can be obtained by telephoning that number, or online at www.stagecoachbus.com/promos-and-offers/north-east/tees-flex.

Northern Rail trains that run between Darlington and Middlesbrough stop at Dinsdale Station in the centre of Middleton St. George, but there is no public transport connection from there to Neasham Village.